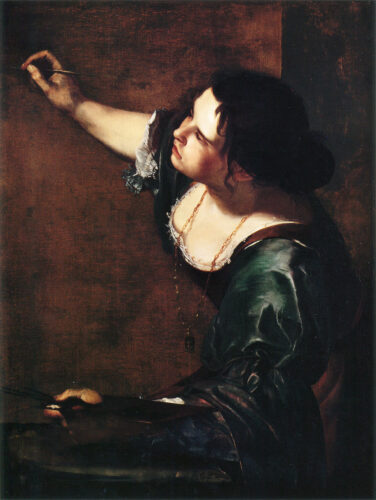 Did you know there are several good art-themed podcasts? They are listed here. Some are about art, art sales, art thefts, and other topics, such as this one that really caught my eye:

Bow Down: Women in Art

Hosted by Jennifer Higgie, editor-at-large at Frieze magazine, Bow Down: Women in Art  is a podcast series from 2019 that pays homage to eight women artists of genius. Higgie also recently revealed that series two is about to begin.

Each 20-minute episode is co-hosted by a leading curator, critic or artist, who also nominates the subject, whether it be Agnes Martin or Angelica Kauffman.

The British artist Helen Cammock, winner of the 2018 Max Mara Art Prize for Women, discusses the life of the 17th-century Italian painter Artemisia Gentileschi in her episode, reflecting on how Gentileschi (who was raped around the age of 18 by her painting tutor), portrayed women who grew stronger through suffering.

The reason it caught my eye was that it mentioned Artemisia Gentileschi, a female artist of phenomenal talent and art production from the 17th Century.

It’s remarkable that when I went to college as an art major, we were not taught about her in the art history curriculum. I sat through 4 long-winded semesters of Art History  at that college, and that history was 90% or more the history of male artists. Like most history I was taught in all schools I attended, most of the history we are taught is about men. (I don’t think men realize how odd this is to experience, for women.)

I remember thinking, where are all the women artists? There weren’t many mentioned, so I thought OK, there must not have been a lot of women artists, or maybe they weren’t very good. (Not that the male artists were all good. Far from it!)  Even the cave painters of ancient times were portrayed as being male artists. I thought – What if they were all women?

There have been thousands of wonderful women artists throughout history, and probably more than that. It’s just that hardly anyone mentions them, even in “art history” classes. I remember taking a Women’s Studies class when I was a junior in college and my professor found out I was an artist. She called me into her office where she had a wall or two full of books, and she pulled out a huge book of artists. It was an art history book, but one which I had never seen or heard of.

Every artist in that book was a woman.  I had heard of only a fraction of them. Women artists that I, as an art major who had already extensively studied “art history,” was unaware existed.  And one of those artists featured in that book, whose work was just astonishing, passionate, and feminist! –  was Artemesia. I thought, “Who is this artist and why haven’t I heard of her before?”  If it hadn’t been for my “Women’s Studies” class, I might not have heard of her at all, until recently. And her art was so extraordinary.

I thought the same thing about most of the women artists in the book. There were so many of them it was overwhelming. I felt like I had discovered a big secret, but it made no sense why it had ever been a secret.

My professor loaned me her giant art book for a couple of weeks, because she knew that I had to become aware of this ‘alternate’ art history, and my mind was blown and my eyes were opened. The two big things discovered: 1) My college didn’t teach art majors about women artists. Why? and 2) There were so many of them! And they were so amazing and great!

I was also a bit angry that these incredible women artists had been kept from me, and my fellow art students, in our “official” art classes. The artists we had been told were so great were all men, and it was all a lie. Women artists throughout the centuries were just as great and amazing artists as the men artists.  It felt like a huge con.

Though colleges classes on art history have probably changed quite a bit since my college days, it remains a puzzling phenomenon how few women artists have become very successful in contemporary times – either with fame or with sales of their art – compared to male artists. I see so many lists online of “great painters” and they still, to this day, rarely include women artists, and if they do, it’s only a smattering of them. It’s disheartening, and incorrect. Males artists are still the recipients of accolades they may not deserve and the most artistic successes, in many communities.  But gradually, women artists are speaking out against the art world’s sexist bias. More of us need to. It’s maddening and wrong to ignore the history and existence of accomplished and talented women artists. Our cultures need to give women artists the respect they deserve, in all ways, including financially and when it comes to recognition.

On a related note, I have decided that this website will be a place where I try to rectify some of the “art wrongs” that have happened in the past and that I have realized no one should be putting up with. I’m kind of a  ‘justice rebel’. I wouldn’t be much of an artist if I wasn’t. So stay tuned for some of these  ideas – a financial reckoning for how artists are treated concerning shows, working for free, getting paid nearly nothing, the real con of juried shows, and more along those lines. It’s about time we all rebelled.