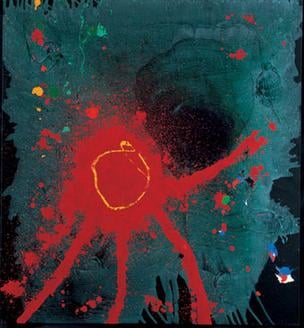 Do you know artists who have a recognizable “style”?
Many artists paint the same way, or in a similar way, using the same type of tools and materials, for most of their professional artistic life. They probably do this because they have been told that having a consistent look to all their art work will make them well known and appreciated. The well-known part is somewhat true, but the appreciated or successful part is not.

Consider this statement about the late, great abstract artist, John Hoyland by Andrew Lambirth in 2009:

“There are those artists who mine a single seam during their lives and whose work may get deeper but remains instantly recognizable, evincing a homogeneity of style and content that easily identifies it. There are others who continue to break new ground, out of irrepressible inventiveness or sheer restlessness. Joy Hoyland belongs to the latter group.”
. . . he challenges himself, breaks his latest mold, and pushes himself beyond all expectation to come up with something new that interests him. The only thing that remains constant is his lifelong commitment to paint.”

This artist made art to interest himself. Isn’t that the most real type of artist in existence?
There is one artist in particular I can think of locally, who paints the same way and has for years, his paintings all looking very similar to each other. They are all red, yellow and black, and all done in the same graphic type style. In fact, many artists at art fairs are like this, and it is encouraged. I never understood this. Where is the creativity in that? Where is the artistry to copy yourself, over and over again?

When I did a lot of art fairs for several years, I was encouraged to do this also, and in fact, this homogeneity in art has been a subject in some workshops and art talks I have participated in. This overall philosophy never made any sense to me. It seems to me that the essence and driving force of an artist is much too imaginative and creative to do the same thing in the same way for 10 years, or even for a few years, much less forever.

Before I realized this, though, I felt kind of insufficient that I didn’t have a recognizable “style” that people could immediately point to. I felt pressured to develop something that wasn’t really “me” but what someone else wanted. (Is this more likely to happen with women artists? Maybe.) Some artists are, unfortunately, made to feel bad about not making boring art. But when pushed to be “consistent” in my art, it angered me, and made me feel rebellious and defiant.  It sounded so disingenuous. How can an artist make art that looks similar year after year, decade after decade, without giving up what makes them creative?

It’s no mystery that some galleries, being the stores that they are, prefer walls (like shelves in a department store) full of the same thing, whether it’s coffee cups at Wal-Mart, or paintings that all look similar. They have a target market, after all.

When I eventually realized that developing a recognizable style for the sake of developing it actually meant that I as an artist was blocked from doing anything new and utterly different,  I just stopped trying.  I stopped feeling bad about being creative and restless. I embraced it. This is why, on Fine Art South, you see such a variety of different types of paintings and styles. I’m an artist with complex layers, not a one-note, one-style, one-subject artist.

I met an artist last year locally who, like me, started out doing very realistic paintings and then when that was mastered, or done enough, they moved on, until they are now doing all abstract paintings. She is an artist who grew, and growth is a necessary part of life. Many artists go through phases like this, to find out what they really like to do, but there is no “end point” where it’s done.

Which is my style? Both of them, actually.

Another artist I knew some years ago told me that the “purest” type of art is abstraction. He was referring to the movie “Painting” a documentary of Gerhard Richter’s work. Richter is a famous abstract artist who doesn’t give a flying fig what anyone else thinks of his art, and his work is very much in demand and included in many museums.  So you see, there are no rules, and there are no set ways to become appreciated, style or no style. (In Richter’s case, I think his success had a lot to do with him being a man, but that’s another subject entirely).

When I was making a series of paintings about five years ago (including Inevitable Inferno) a person saw my paintings at my art show and said the same thing – that artists often start out doing realism and move into abstraction, because it seems like the ultimate type of art. At that point I was doing realistic images on abstract backgrounds. I still do that because I enjoy doing it, but it’s not my “style”.

I have seen many exhibits in museums and galleries where the display by one artist looks virtually the same, and all their work is the same, but I am drawn to artists who do radically different things at different points in their careers.  Another artist who fits that description is Yayoi Kusama. I saw her exhibit “Infinity Mirrors” at the High Museum two years ago in Atlanta and was blown away by her  “boxes” of infinity, but also by the fact that she has done many different types of art during her long life. Below are some variations of her art during that exhibit. 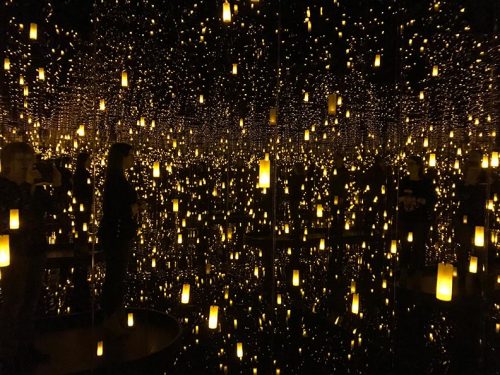 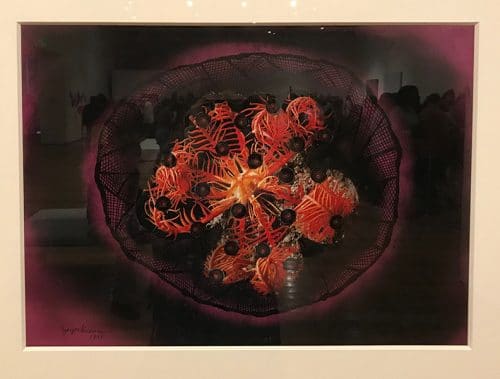 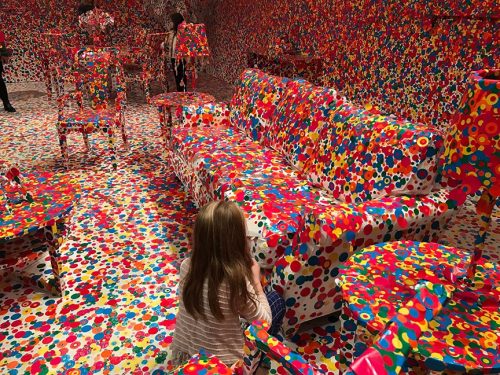 In the end, the advice I would give any artist is this: never feel bad about doing whatever you want as an artist. That’s what it’s all about. Be as varied and creative as you want, do what feels true to you at any given time, and tune out the noise that wants you to be boring.