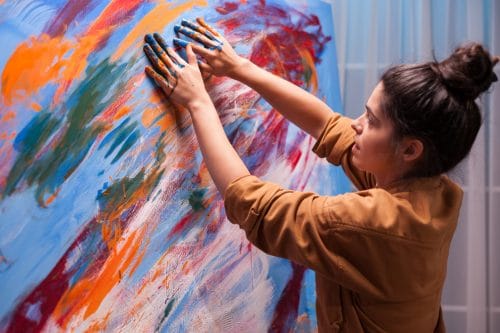 “When I dare to be powerful, to use my strength in the service of my vision, then it becomes less and less important whether I am afraid.” – Audre Lord

You will see article after article online telling you how “The Starving Artist” is a myth and if you just work hard and put your mind to it, you can be a successful artist and support yourself and your family and your dreams with your art. There is a lot of that being sold these days. The people telling you that share their  ideas how you can be “successful” – such as teaching and writing books and giving lessons – part of the magic formula on how this is done. Usually the people telling you these things are selling something, such as art coaching or some type of catalog where you can buy a page “for only $400!”. I have fallen for these things. It’s not that they are scams, but these are claims made by people selling their services, so of course they have to talk it all up like it’s possible that you too will become a famous, rich artist in high demand.

I will give you an example. I took an expensive online class not that many years ago from a well-known gallery in Arizona, and the theme of the class was how to succeed at being a gallery artist with lots of sales. The class was conducted via the gallery owner coaching his new protegee that had won his contest and shown him that she was the most likely to succeed. The reason she was most likely to succeed was 1) she produced art that all looked alike 2) the art was “sellable” and looked like you opened a box labeled “gallery art” and her stuff was inside of it, 3) she was willing to do whatever he said to do, I.e., change her artwork to be whatever he wanted it to be, and 4) she was very interesting, personable, young-ish, and photogenic.

I don’t know a lot of artists who could do what she did, but I think it worked for that artist because she was already very much like he wanted her to be and didn’t need to change much. I would have had to change a whole lot to fit into the mold he was creating for her. From visiting other galleries, I know that this is true of most galleries I have seen, especially the ones in larger cities. They become very homogenous in what they present to the public. They want to sell a lot of art and profit off the artists’ work, so that makes sense.

But the most disturbing thing I noticed during this “class” was that all of us rejects, who didn’t win the coaching prize but were allowed to listen in on all the coaching videos – most of the struggling artists were middle-aged women, all wondering the same things. Many of us were wondering, why aren’t there any men here? (My specific question – is it because they get taken seriously as artists at a young age and therefore don’t have to take coaching classes when they’re in their 50s?) and, is this all a scam?

I don’t think the class was a scam, but it was disturbing to see all these women, middled aged and older, still trying to be taken seriously as artists, and still trying to get into galleries. It was sad. It was even kind of depressing. It made me think that nothing was going to work for any of us. 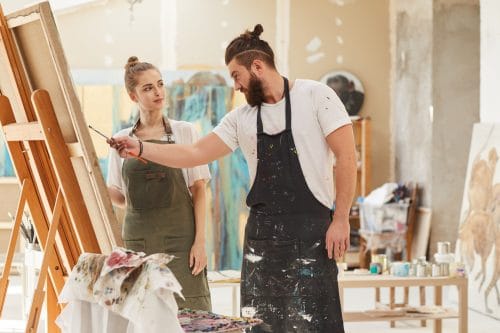 Is the male artist more likely to be paid for his artwork and taken seriously than the female artist?

This article does not end with a happy story or a book to buy or a secret to share about how to become a “successful” artist. I don’t know how to do it any more than any other artist does. I know what I have seen online is much more promising than trying to chase down galleries and begging them to take our art and hang it on their walls. That seems like a fool’s errand now more than ever.

There does seem to be another factor at work: sexism. Male artists are generally higher paid than female artists. Women artists are not taken as seriously by big galleries and employers (and even art teachers) as male artists. This is a reflection of the general sexism of American society but it’s also something more accentuated in the art world than in other industries. It doesn’t mean you can’t overcome this bias if you are a woman artist, but it is something you might have to deal with. I have encountered quite a lot of sexism in my art career, including male artists becoming the “stars” of an entire art community in a small city I used to live in,  while the female artists are mostly overlooked. I have seen very good women artists relegated to art teaching positions, as though that is “their place”. We women artists can and do overcome some of this with persistence and determination, but it should not be happening.

The internet offers us all a great opportunity.

The things I have seen online that seem to work the best as far as sales, are websites with good galleries where people can buy your artwork directly from your website. The other thing I see online that seems to produce a few (not a majority, but a few) successful artists making a living at their art is artists who create personas and sell on sites such as Patreon.

I have seen some artists be successful on large group art sites, but only on a few. (One was the now-defunct Vango). There are probably under 10 visual artists selling a lot of art on Etsy. Etsy really isn’t the place to sell serious “fine art” or prints or illustrations unless it’s totally commercial stuff. The last thing I bought on Etsy was a face mask, and it was one I don’t even like.

I have never seen any artists successful on websites where they sell cards, t-shirts, license their art to TV productions, and things like that. Fine Art America is a site that I have been affiliated with for years and year, and I have never sold a single damn thing through that website. Why? Probably because when people go there, they see the art work of about a million other artists too, and quickly start looking at their work instead of mine.

I have seen people sell a lot of art on eBay and honestly that is one place where I have sold quite a bit of art also, but it’s not enough. The only place I really want to sell my artwork through is my own websites. I have two besides this one, but this one is my real, main, serious gallery.

This article so far has covered selling your art. Assuming you have not sold a lot of art online, what keeps you going as a visual artist?

For me, what keeps me going, and continuing to produce artwork that I like, and that I hope others appreciate, is my belief in myself, and a belief in my own artwork. I also think that it helps to have “ulterior motives”, such as a desire to produce art that is something other than wall decoration. For example, I do environmental artwork. In the past, I have done political artwork. If your art has a purpose other than being “pretty” you will probably tend to last as an artist your entire lifetime. If you just want to do pretty pictures of landscapes or whatever, and if you don’t sell everything you produce, you will probably not last long as a visual artist and might even end up resenting that you wasted time on it.

Have a purpose and appreciate who you are! This will going a long way to lasting as an artist.

As for “becoming” an artist: this is something you either know about yourself or you don’t. Artists are born, they are not manufactured, no matter how many art classes you take. If you don’t have that fire in your belly to keep on being an artist, you will not continue to be one for very long. You have to have a belief in yourself, and at times it has to be an irrational belief in yourself, even when others don’t believe in what you are doing.

You don’t necessarily have to enjoy making artwork, at least not all the time. You do have to be obsessed with continuing with it to some degree, however.  You should also have a work ethic so that you don’t ever actually stop being an artist.

You also don’t have to have an easy time making art. That’s one of the most damaging myths I have ever encountered – that it should be easy, or second nature, to make art that you are proud of. It should be however it is for you. For me, it’s both easy and hard. Most of the time, it’s difficult to get the place where I am proud of what I’ve created. For some artists, it’s easier. For some artists, it’s very difficult to finish a painting or a drawing or whatever it is they do. It does not have to be easy and it probably shouldn’t be.

Some artists hit a wall and become discouraged. We have all been there at some point. When it feels like there is no point to making art anymore? Take it one day at a time, believe in what you are doing, and keep going. There are many ways to “be” an artist. It’s not just the application of pigment to canvas, or Apple Pencil to iPad. There is everything in between, which is also “making art”.  There is the dreaming, the idea formation, the inspiration, the thinking, and the more thinking, the planning, and the sketching, sometimes the commissions, (which involves taking direction) and all that comes along with producing a finished piece of art. It’s a long process.

You don’t have to be like anyone else, or be pressured to do art like a “successful” artist. Be who you are. Have a vision. That may work for you, or it may not, but at least be proud of what you do. Then like the old Nike saying, “Just do it”.